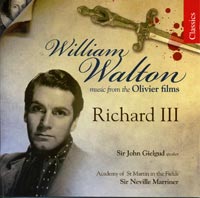 Description: Through the indefatigable efforts of the late Christopher Palmer, who found all of the music, transcribing it from the films themselves when necessary, Chandos was able to offer three full discs of Walton's music to films of Shakespeare (and one G.B. Shaw play as well!) back at the beginning of the 90s. Full original-length booklets included. Sir John Gielgud (speaker), Academy of St. Martin in the Fields; Sir Neville Marriner. Original 1991 Chandos release.