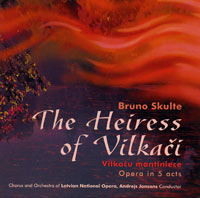 Description: Close in age to last month's Latvian composer, Cyrillus Kreek, Skulte was also forced to flee the Soviets after World War II and spent several years in Germany before emigrating to the U.S. where he was organist and choir conductor for the Latvian Evangelical Lutheran Church in New York City and also became active in promoting and conducting Latvian song and choral festivals. This opera, based on a Latvian novel, was begun in Germany in 1947 and, while completed, never orchestrated beyond the first scene. The conductor of this recording completed the orchestration for Skulte's centennial and the work was given a concert performance in Riga in November of 2005. A good description of Skulte's style was given by Latvian-Canadian composer Talivaldis Kenins: "...deeply rooted in the traditions of the 19th century and displays the lyrical poignancy, Romantic accents and expression of personal feelings characteristic of that period..." In its folk setting (side-by-side farms, one with boy heirs, one with a young woman heiress, accusations of witchcraft, Midsummer Eve and betrothal celebrations) and in its style, one thinks of a blond, pale blue-eyed Dvorák, never going beyond what one might have heard from a similarly transplanted Janácek. Latvian-English libretto. Andzella Goba, Inga Slubovska (sopranos), Armands Silins (bass), Guntars Rungis (tenor), Latvian National Opera Chorus and Orchestra; Andrejs Jansons.