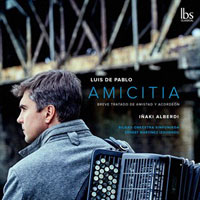 Description: The excellent accordion concerto is the raison d'être of this collection, having resulted from the ongoing collaboration between the composer and the present soloist. The two understand each other so well that everything about the piece’s huge expressive range is perfectly realized in terms of the relationship between the somewhat unusual solo instrument and the huge orchestra, used to provide the greatest variety of colour and texture. The writing for the accordion, too, is vastly imaginative and original, not least in the requirement for the two keyboards to play equally important rôles with different material, like the manuals of an organ; the left hand manual, normally used for accompaniment, is given an unusually prominent rôle, allowing great timbral variety. De Pablo's brand of extended tonality is ideally suited to the polyphonic capabilities of the instrument, in its intricate dialogues with the ensemble, and demanding cadenzas. The first movement begins with amorphous scurryings in the orchestra, which are soon joined by rapid-running chordal figuration from the accordion, which leads the action of the rest of the movement. The slow movement is brooding and desolate, unquiet and tragic in mood. The soloist wanders through the gloomy landscape, a shadow of its assertive character in the opening movement. The finale is a sort of toccata, somewhat measured, at least in this performance. A substantial cadenza explores unpredictably changing gestures and chords, then the toccata material leads to a menacing, subdued climax and a conclusion that returns to the agitated misty textures of the opening. Soon after the concerto, de Pablo wrote the 3 Riflessi for organ, and promptly transcribed them for accordion. The music's rich, saturated chords and polyphonic textures are ideally suited to the composer’s style of accordion writing, and with the timbral capabilities of the left hand manual and the dynamic flexibility of the bellows, the emulation of the organ is quite uncanny. The immensely attractive and thoroughly enjoyable Three Pieces were (improbably, and entirely successfully) transcribed by the performers in 2005 from 3 movements of de Pablo's 2nd Piano Concerto: "Hommage to Mompou”. The outer movements are lively and energetic, propelled by crisp, pulsating chords, while the central andante is a miracle of subtle, varied orchestral color, conveyed remarkably well by the accordions. Iñaki Alberdi (accordion), Iñigo Aispiolea (second accordion), Bilbao Symphony Orchestra; Ernest Martínez Izquierdo.