VICTORIA BORISOVA-OLLAS (b.1969): Angelus, The Kingdom of Silence, Before the Mountains Were Born, Creation of the Hymn, Open Ground. 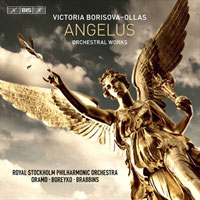 Description: A very welcome disc of Borisova-Ollas' opulently and colorfully orchestrated, neo-Romantic, tonal orchestral works. Angelus is a portrait of the city of Munich, with its modern energy and ancient history. It begins with archaic, chant-like mystery, out of which arises what might be described as a neo-Mahlerian daybreak, with the church bells, approaching fanfares and birdsong emerging from the gloom in a grandly cumulative crescendo, leading to a blazing sunrise. The pulsating energy of a modern city in full voice follows, increasingly hectic and discordant, but we step into the calm of a church and the voice of the organ restores a sense of balance. Now the focus shifts to the birds, and to the carillon of the Rathaus, faithfully notated by the composer. As the calm of evening starts to descend, in a kind of neo-Mahlerian chorale this time, we hear the solemnity of a church service, and the Angelus bells ringing out across the city and taking on a colossal, universal aspect in a monumental climax before the mysterious night returns. The Kingdom of Silence, in memory of the extraordinary composer Nikolai Korndorf (1947–2001) [see 11O081] , is a dreamlike meditation on the afterlife. It has characteristics in common with Korndorf's own eclectic, quintessentially Russian music, in a series of richly layered episodes alternating intense drama, and solemn stillness and mystery, almost an instrumental requiem with echoes of bells and chant. Before the Mountains were Born is based on Psalm 90, a passionate entreaty to an all-powerful and wrathful God. The slightly odd semi-concertante work, commissioned by the RSO Stuttgart to feature their woodwind principals, is inventively orchestrated, displaying the orchestra to its best advantage; the composer herself admits that it "starts as a ‘regular’ orchestral piece", and the concertante group are not really highlighted until a busy, babbling, virtuosic group cadenza 3/4 of the way through. Overall, the piece could readily be taken as an illustration of Gerard Manley Hopkins' "God's Grandeur" ("The world is charged with the grandeur of God ... "), which expresses the spirit of awe suggested by the psalm. The first section is powerful and monumental, followed by a kind of slow movement and scherzo which pass through a variety of burbling, sparkling textures as though surveying the wonders of creation as a backdrop to the appeals of the faithful, which are heard in the voices of the solo instruments in the cadenza. A warm, pastoral passage with bells and a triumphant finish suggests that the prayers were heard. Creation of the Hymn is the composer’s adaptation of a work originally for string quartet. It comprises five variations on a solemn, imposing theme, which stray further and further from the character and tonality of the theme as the work progresses, but by slow degrees, so that the transformational process is readily appreciated. Turbulent middle variations lead to the emergence of passionate solo voices in the last two, which rise out of chaos to proclaim the re-establishment of the opening mood. Open Ground is an exuberant, dizzying scherzo for orchestra, inspired by Salman Rushdie's tumultuous reality-and fiction blurring novel "The Ground Beneath her Feet" and composed as an adjunct to Borisova-Ollas' collaborative multi-media operatic treatment of the novel. Royal Stockholm Philharmonic Orchestra; Andrey Boreyko, Martin Brabbins, Sakari Oramo.