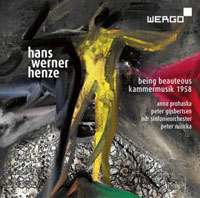 Description: Henze's odd, but compelling, setting of Hölderlin's “In Lieblicher Blaue” which the composer described as "the vision of a poet who has clouds of madness around his head, and who stammers in fragments, with beautiful, seemingly dislocated phrases." The poem's strange but vivid progression of images, which make a kind of desperate, chaotic sense, are delivered in a vocal part of expressionistic ardor. The work is in twelve sections plus an epilogue added in the 1963 revision, with ensemble and solo guitar interludes between the vocal movements; the guitar episodes in particular exude Mediterranean warmth, redolent of the sun-drenched mythical elements of the poem and the atmosphere of Greece that entranced the composer on the visit that inspired him. Elsewhere, harmonies are harsher, reflecting the poem's disturbingly disjointed non sequiturs of imagery. Despite this, the piece as a whole has the lush textures typical of Henze's style after he relocated to Italy in 1953, especially in this, the first recording of the version with string orchestra. Though by no means tonal, the work contains passages of gorgeous, Bergian lyricism, and the indebtedness of the final section to Das Lied von der Erde is hard to miss. Being Beauteous (1963) sets Rimbaud's poem from “Les illuminations”, its juxtaposed imagery of beauty, decay and death presented in a gorgeously sensual treatment that anticipates Henze's later, more neo-romantic style.