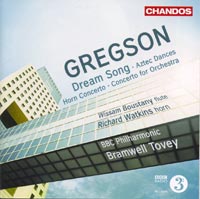 Description: This fourth volume of Gregson's music covers a period from 1971 to last year, letting us hear stylistic periods: Hindemith and Bartók figure in the horn concerto of 1971 (originally for soloist and brass band and only orchestrated last year) while in 1983, his Greenwich Dances, revised in 1989 as Contrasts and revised again in 2001 as the Concerto for Orchestra recorded here, show a greater ambition fueled by Tippett's mosaic forms and Lutoslawski's temporal and textural freedom (great energy pulses throughout this piece's two fast movements). The Dream Song (2010) was commissioned to accompany the Mahler 6th in a series of BBC commissions (all to be performed with Mahler) and Gregson turned this into an unsettled, uneasy dream-like piece of 20 minutes with a frightening scherzo and enigmatic, pastoral trio in its center through which elements of the Mahler symphony appear in fragmentary, distorted form. Finally in Aztec Dances of 2013, we have Gregson the conjurer of primitive exoticism (the four dances are Ritual/Pastorale, Fertility Dance, Ghost Song and Sacrificial Dance) delivering music with vivid color and a visceral punch. Wissam Boustany (flute), Richard Watkins (horn), BBC Philharmonic; Bramwell Tovey.