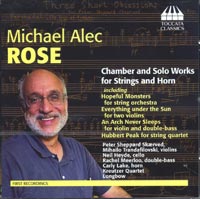 Description: The American composer's ongoing collaboration with Skærved and his colleagues has provided the impetus for a number of strikingly characterful pieces. Rose has developed a very personal idiom, obviously resulting from a spirit of deep inquiry into the nature of his craft - just consider his thoughts on what constitutes a 'pastoral': "The pastoral is a psychological condition ... in which a person ... tends to notice the most mundane details ... and assign extraordinary significance to them all." This multifaceted approach imbues all these pieces with extraordinary resonance, a wealth of allusion and reference. For example, Rose's take on The Four Seasons, for the ostensibly limited resources of two violins, brims with humor, atmosphere, references to Beethoven's peasant dances and sophisticated introspection, Baroque figuration and Bartókian dissonance. 'An Arch ...' begins with a comically, but also symbolically, distorted Gershwin quotation; the piece then explores many aspects of the architectural arch - dynamic, elevated, open, an elegant attribute of a stately dance salon, and a ruin. And all because arches are a motif of the commissioning London theatre; the six minute piece is like an illustrated tourist guidebook to the building's history. English history and landscape - bringing out elements of a Vaughan Williamsian vocabulary, spokem with a trace of the composer's Coplandish American accent - recur throughout the program; in the seasonal pieces, Palimpsest, Dr Johnson (the latter an engaging dialogue of sympathetic opposites) and so on. Hopeful Monsters - less frivolous than the title might at first suggest; it refers to evolutionary processes at a watershed between new life and extinction - is another historical piece, commemorating an uprising in opposition to Nazi sympathizers in London's East End in 1936. The work combines richly harmonized, sonorous melodies derived from vigorous revolutionary songs and traditional Jewish music in a powerfully graphic tableau, its emotional heft far outweighing its scale. Peter Sheppard Skærved, Mihailo Trandafilovski (violins), Morgan Goff (viola), Neil Heyde (cello), Rachel Meerloo (double bass), Michael Alec Rose (bell), Carly Lake (horn).