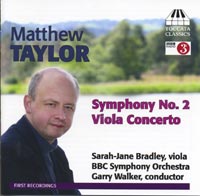 Description: Taylor's Second Symphony is a broad, ambitious canvas, magnificently symphonic in every sense of the term. The work was conceived (sorry!) in response to a commission by a distinguished gynæcologist, and takes as its point de départ the idea of embryonic development and birth, somewhat akin to Robert Simpson's Sixth. While there is a definite sense of quickening, gathering energy as the work progresses (with the gentle slow movement an episode of slumber), in a sense these programmatic ideas belong more to the composer's workshop than the finished piece, which suggests more universal life-affirming forces than the synecdochic image of the embryo might suggest. The work's cumulative power and massiveness invites comparison with Nielsen's 4th - in general the symphony's vitality and powerful directional tonality, as well as some passing gestures and phrases, are often reminiscent of Nielsen, either directly or via Robert Simpson. There are Brucknerian gestures to be found as well - largely more of a confluence of symphonic thinking, again inherited through Simpson, than actual stylistic allusions - but it should be emphasized that these antecedents have been thoroughly absorbed, and Taylor's voice is very much his own. The work follows the traditional form; an extremely impressive opening leads into the first movement, which is followed by a vigorous scherzo. The serene slow movement in muted colors and gentle rocking motion is next, and leads into the rapid finale, which accumulates energy and textural weight as it progresses to a blazingly affirmative conclusion. The Viola Concerto was originally called 'Humoreskes' in homage to similarly titled works by Sibelius and Schumann, and this is appropriate enough for the first two movements, transparent, lightweight and easy-going. The music takes a more serious turn in the central slow movement, a slow siciliano of considerable emotional depth, and the following adagio, which consists largely of a solo cadenza, but contains a powerful climax, very reminiscent of the Mahler of the 9th and 10th symphonies. Something of this expansion of scale carries over into the finale, which is energetic and playful, but contains the work's only full-scale tutti textures. Sarah-Jane Bradley (viola), BBC Symphony Orchestra; Garry Walker.