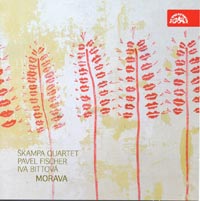 Description: This release finds itself on the eclectic back-page of the catalogue since it's not really "classical" classical music.  It's folk music worked into a shape playable by a classical instrumental grouping. Fischer was the founding first violinist of this string quartet but had left it by the time he was commissioned to write the Morava piece in 2007. This is mainly inspired by Moravian cimbalom music but includes a Roma lament and a csardas for solo cello. After settings for voice and quartet of two Moravian folksongs, Fischer returned to folk-music quartet-writing with the 2008 Wild Mountain Thyme, whose title is a Scottish folk-song which furnishes the theme of the slow movement and is surrounded by a Jig and a Reel. Scottish and Bulgarian bagpipes and bear-taming Roman songs are behind the Mad Piper while Bittová's Hopáhop tálitá, based on Moravian folk music, demands improvisation, both vocal and instrumental from the performers. A perfect companion to the disc above. Czech-English texts. Skampa Quartet, Pavel Fischer and Iva Bittová (vocals).