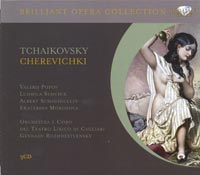 Description: Tchaikovsky's only comic opera is an 1885 revision of an original 1875 Vakula the Smith. Based on Gogol's short story "Christmas Eve", the tale involves a blacksmith, his witch mother, the Devil and the blacksmith's love interest, Oxana. Although the original production was true to Gogol's fantastic, fairy-tale style, it failed and Tchaikovsky extensively revised it, eliminating much richly developed orchestral music and adding and highlighting small vocal numbers in which lyricism predominates over declamation. Still, there is much lovely music here, including an extended addition in Act 3 (the St. Petersburg music) which looks ahead to such ballets as Sleeping Beauty and such operas as The Queen of Spades. 3 CDs. No libretto. Valeri Popov (tenor), Ekaterina Morozova (soprano), Albert Shagidulin (baritone), Chorus and Orchestra of the Teatro Lirico, Cagliari; Gennady Rozhdestvensky. Original 2000 Dynamic release (11C042).