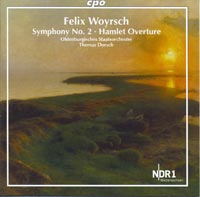 Description: Some of you will have Woyrsch's Symphony No. 1 on a 1995 MD&G release now out of print (two years before I took over RI; seems like ages ago doesn't it?). For those who don't, I'll briefly note that the composer was from Moravia, lived and worked in the Hamburg suburb of Altona, where he founded a series of symphony concerts in 1903 and became municipal music director in 1914, and was basically self-taught. His mature musical style crystallized during the first decade of the 20th century, leading up to the Symphony No. 1 (1908). The Second (1913) is an Apollonian follow-up to the Dionysian First. A four-movement work lasting 48 minutes, it opens with a very scherzo-ish, unbuttoned first movement which might make you think of a well-behaved Richard Strauss while its slow movement struck me as Bruckner if Bruckner had been Anglican instead of Catholic (imagine my delight to later read in the notes the description by a German composer and professor describing "an ethos reminiscent of Bruckner but rooted in Protestantism"). Instead of a scherzo there's a theme-and-variations movement on a folk-like theme and a purposeful, passionate (but not crazed) finale. The Hamlet overture (1912) is one the more graphic and colorful tone-paintings of its type which you'll ever want to hear. Woyrsch basically extends the tradition of Brahms and Bruckner well into the 20th century (he wrote five more symphonies after this one) but you'll also hear elements of French Impressionism and German Expressionism along the way to spice up the dish. Here's a composer who needs to have a complete symphonic cycle recorded. Will it happen? Who knows? Oldenburg State Orchestra; Thomas Dorsch.