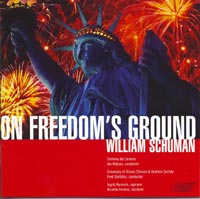 Description: The raison d'être for this new release is the 40-minute cantata, On Freedom's Ground, commissioned for the 100th anniversary of the Statue of Liberty. The text was supplied by the 1987-88 poet laureate, Richard Wilbur and is striking for its affirmation of immigrants and for the list of various injustices committed by this country. Since it was intended for such a visible occasion, it is far more tonal and approachable than any of the purely symphonic music of Schuman's late period (the fourth section is even entirely concerned with dances), but you still won't confuse it with a Broadway musical! Texts included. Ricardo Herrera (baritone), Ingrid Kammin (soprano), University of Illinois Chorale and Oratorio Society, Sinfonia da Camera;  Ian Hobson.