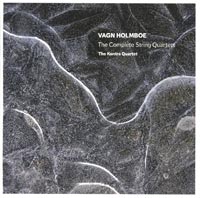 Description: One of the most important string quartet cycles of the 20th century is now available at a ridiculously low price. Space precludes any summary of the stylistic progression of Holmboe's cycle but a general statement from Robert Layton in a 1996 "Gramophone" review is useful: "Those who know them well will know that the claims made on their behalf are not a whit exaggerated. True, the quartets have a certain reticence and rely on their cumulative effect rather than on beauty of incident. There is no more an attempt to cultivate a popular appeal than there is in the quartets of Sir Michael Tippett or Robert Simpson. And, like Simpson, Holmboe is perhaps more at home with the string quartet than any other medium." 7 CDs for the price of 2. Kontra Quartet. Original 1992-2006 Dacapo releases.