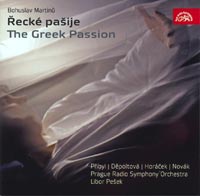 Description: Collectors who know this work from its Welsh National Opera soloist/Brno State Philharmonic recording conducted by Charles Mackerras which was released by Supraphon in 1981 might be startled to know that, less than four months after that version's June recording, Supraphon made this one in Prague (which was not released for almost two more years). Why? This one is in Czech translation (remember, Martinu wrote his own original libretto in English) and it will likely deviate some from the original. The few Czech productions of this opera between 1962 (its premiere in Brno) and the date of this recording had to cut some references to God and to religious feeling; this version here, according to the notes, "strove to bring the Czech text closer to the original... for the first time." As there is no libretto with translation, Martinu experts will be most able to compare... 2 CDs. Budget-price. No libretto. Eva Depoltová (soprano), Vilém Príbyl (tenor), Richard Novák (bass), Czech Radio Chorus, Czech Radio Children's Chorus, Czech Radio Symphony Orchestra; Libor Pesek. Original 1983 Supraphon release.