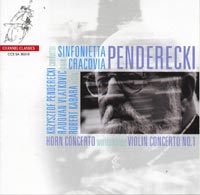 Description: World Premiere Recording of the 2008 horn concerto - Penderecki's first concerto for a brass instrument. A single-movement work of a relatively short 17 minutes, it is associated by the composer with the "music domestica" created at his pastoral country estate and usually meant only for performance at that site. A passacaglia-based slow introduction leads into the main rondo da caccia which is a fine example of Penderecki updating the traditional hunting associations of the horn with seasonings of the timbre of sounds which is part of his sonoristic approach to composition. The first violin concerto (1974-76) marked the end of Penderecki's stylistic transition from the avant-garde to his late-period emphasis on expressivity using harmonic means with their roots in the late 19th century - in single-movement form of near-Brucknerian proportions (42 minutes here) in which the soloist weaves in and out of a constantly metamorphosing orchestral fabric which runs the gamut from uneasy lyricism to shattering explosions Radovan Vlatkovic (horn), Robert Kabara (violin), Sinfonietta Cracovia; Krzysztof Penderecki.