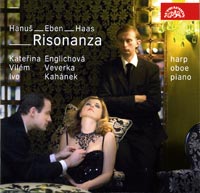 Description: Hanus provides a tapestry of glittering colors and ever-shifting timbres and textures, in his Trio concertante of 1978 using a tonal language up to date for his time and place with plenty of reminiscences of pre-war neo-classicism. The oboe sonata comes from the hopeful year of 1968 and is a delightful little 12-minute work, rhythmically loose in its freely imagined opening movement and in rigorous sonata form in the finale. Eben's 1964 Ordo pours slightly astringent yet still tonal modernism into the glasses of a neo-classical suite. Haas' poignant and expressive suite was written in October 1939 and bears witness to the bleakness of the immediate future but with a touching, lyrically sad oboe line which might represent the eternal human hope for better times. Vilém Veverka (oboe), Katerina Englichová (harp), Ivo Kahánek (piano).