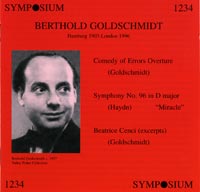 Description: Historical collectors may want the 39 minutes of Beatrice Cenci excerpts here (in addition to the original BBC announcer's introductions and synopses), which were conducted by the composer who also preserved the broadcast on tape (the BBC didn't bother...). You may recall that this was one of four operas which won the ill-fated British Council opera competition for the 1951 Festival of Britain (none were subsequently produced). Recorded by Sony and released in 1995 it is now long out of print.