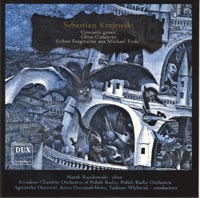 Description: This is a curious stylistic mixture - accessible, appealing, but odd. The two Concerti grossi are faithfully modeled on their antecedents from various stages of the pre-classical peiod, the most obvious being Vivaldi and Corelli. They are scored for a concertino group with continuo (cello and harpsichord), and tutti ensemble. Some movements are pitch-perfect Baroque pastiche that could pass for the real thing - the first one starts that way, and keeps it up pretty consistently for much of the first three movements, only occasionally arousing suspicion that it might in fact be a twentieth-century transcription of an original work. But the lively chaconne that ends the work would have been pretty adventurous in the Baroque era - not entirely out of the question; there are some eyebrow-raising moments in Jean-Féry Rebel, an acknowledged influence - as would some of the harmonies and discords in the second concerto. The Oboe Concerto was written as a companion piece to the Vaughan Wiliams. It seems like a prime example of the sort of thing Elizabeth Lutyens inveighed against with her withering comments about 'folky-wolky modal melodies played on the cor anglais [recte: anglé]’ and maypoles - the problem being, of course that this piece was written in 2005 by. a Polish composer, apparently in an irony-free tribute to a vanished English tradition. The Seven Fragments illustrate scenes from The Neverending Story, the esoterically philosophical children's book that was made into a film that the author disliked sufficiently that he sued to be disassociated from it. The pieces are very short, and sound like neo-romantic film music cues, picturesque and attractive but of no great substance. They were originally intended as incidental music for a stage production based on the book.