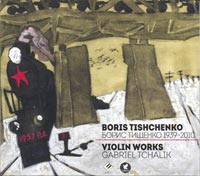 Description: The 1994 Fantasy is a substantial work lasting almost a quarter-hour, in a version of sonata form. A fearsomely virtuosic work for both players, it begins with a folk-like theme, followed by a fast section full of lively syncopated rhythms and Bartókian dissonances. After some development of these materials, the work arrives at its emotional climax, a massively sonorous, funereal central section, with very Shostakovich-like melodic contours and long-breathed phrases. A lively recapitulation grows into a powerful final section in which the initial theme in violin octaves is accompanied by huge bell-sounds and rapid scales from the piano. The First Sonata for Solo Violin is an early work, written when the composer was eighteen, before he came under the influence of Shostakovich. Some influence from Prokofiev is detectable, alongside a young, adventurous composer's experimentation with pushing the boundaries of tonality in acknowledgement of the 'forbidden' modernist trends from the west that were occasionally accessible in the late 1950s via smuggled scores and gramophone records. The attractive, and thoroughly accomplished Op.2 Rondo is earlier still, and here the similarities to Prokofiev are more marked, and the modernism absent. The major work here is the 1975 Second Sonata for Solo Violin. This half-hour work in a single arch form span consists of four main movements in a tonal idiom with varying degrees of chromaticism, separated by intermezzi. The latter are post-Webernian exercises in disconnected gestures and atonal Klangfarbenmelodie timbres. The first and last movements are a maestoso prelude and epilogue, which share material. The Sonata second movement is a combined sonata-allegro and abrupt, sardonic scherzo, and it is here and in the long, plaintive Aria that the Shostakovich influence is most apparent. The tragic Aria is the heart of the work, its stark, lamenting phrases tracing an arc of mounting tension and intensity. The little Capriccio is a virtuoso showpiece in rondo form and largely tonal idiom, and the Two Dances are playfully clumsy children's pieces, the middle section accompanied by a rustic tambourine rhythm. Gabriel Tchalik (violin), Dania Tchalik (piano).