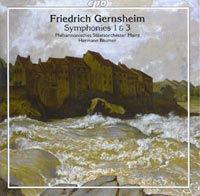 Description: Our featured item in August 2001 was the two-disc, budget-priced Arte Nova 1999 release of all four Gernsheim symphonies (05D001). There are Brahmsian influences but Brahms looked back to Beethoven while Gernsheim was more of a Spohr and Schubert guy. Those of you who enjoy comparing recordings will want this new cycle (the other two symphonies will follow fairly soon) since the difference in timings suggests that Bäumer takes the first-movement repeat in the First; other differences suggest a broader approach to the two slow movements. The First (1875) predates the publication of Brahms' No. 1 and the Third, inspired by a hearing of "Miriam's Victory Song" in Handel's Israel in Egypt, from 1888. An early 20th century biographer characterized No. 1 as "impassioned" and No. 3 as "heroic". Philharmonisches Staatsorchester Mainz; Hermann Bäumer.