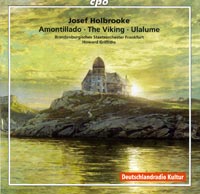 Description: Only Ulalume (1903) has been recorded before (on Marco Polo back in 1992) and it is the most striking work here due to its evocative and darkly colorful Impressionistic character. The Viking (1900, rev. 1901) was originally performed as The Skeleton in Armour, the title of the Longfellow poem it's based on; the longest work here at 19 minutes, it's also the most conservative. In the tradition of Liszt, but even more of the English 19th century tone-poems like Hyperion has recorded, it tells a fairly detailed musical tale (the listener is helped greatly by notes telling him what's happening but he need not know it to appreciate the rich, eventful narrative). As does the much later Amontillado (1936) whose rather light quality is due to the festival through which Montresor and Fortunato make their way in Poe's tale - but it ends with an emphatic immuration. Three Blind Mice (also 1900) is one of the finest pieces of concert light music you'll ever hear. You'll want to put it right up there with Dohnányi's Variations on a Nursery Rhyme (except that this has no piano solo); and wait until Holbrooke brings in For He's a Jolly Good Fellow and The British Grenadiers and winds them all together at the end! Brandenburg State Orchestra Frankfurt; Howard Griffiths.