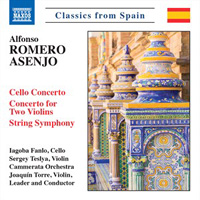 Description: For some reason, the booklet notes suggest that the composer incorporates elements of the 'avant-garde' in his style, but in fact the music is basically tonal, larded with varying degrees of dissonance. In the symphony, this pithy and pungent idiom is well suited to the tense, rather dark expressive mood. The first movement is truculent and insistently argumentative. The central Lento is uneasy, with a central climax which suddenly emerges into view from the mists and ushers in an unsettled, lyrical lament. The finale begins with scurrying figures, followed by an episode built on insistent ostinato patterns and ending with an agitated toccata. The tonal basis of the other works, from the 1990s, is less obscured by the extreme dissonance of the symphony’s language. This is especially true of the Divertimento, which was written for the use of youth orchestras; the work comprises three movements, restless but attractive, the finale being an incisive fugato. The concerto for two violins also makes use of Baroque devices in deliberate homage to Bach, and especially to his similar work, which is constantly referenced in a delightful neo-Baroque parody with piquant modern harmonies. The fine cello concerto, from 1995, is a brooding, dark-hued work. Unusually structured, it is divided into five sections, the first a melancholy long-breathed lament threaded through by an aching melody line from the cello, in an intense slow movement very reminiscent of Shostakovich. A trenchant scherzo-like movement follows, driven by a mordantly incisive accompaniment. Unexpectedly, though, subsequent sections pick up where their stylistic predecessors left off, resulting in a kind of symmetrical rondo structure, ending the work in the sombre mood of exhausted resignation with which the work began. Iagoba Fanlo (cello), Sergey Teslya (violin), Cammerata Orchestra; Joaquín Torre (violin and conductor).