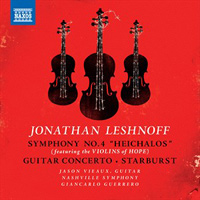 Description: Leshnoff's Fourth is exactly what a neo-Romantic symphony should be. It has a compelling program, explored in music of cogent argument, expressed on a grand scale. Like the composer’s symphonic works offered before (12S010 et al.) the vocabulary is tonal, the orchestration rich, the drama monumental. Commissioned for the Nashville Symphony’s “Violins of Hope” project - a collection of restored instruments from the Holocaust - the work draws on an ancient Jewish mystical text, Heichalos Rabbasai, which describes the route to spiritual fulfillment via union with God. The first section is prefaced by monolithic chords and consists of urgent propulsive music, tumultuous and driven. The second begins like a lamenting Mahlerian adagio, with the violins to the fore, then accumulates weight and texture in a long crescendo which culminates in an overwhelming climax, piling layer upon layer of grandeur. The violins close the work with a serene epilogue. The concerto is an attractive work in three movements, paying idiomatic and characterful homage to the guitar's traditions, especially that of Spain, in the sparkling outer movements. The middle movement is a beautiful spiritual and philosophical reflection, not just a lyrical interlude (though it is that too). Starburst is an energetic concert overture, rather more varied and sophisticated than these things often are, but no less exciting. Throughout all three works, Leshnoff's original use of unexpected but logical modulations and harmonic juxtaposition are a constant reservoir of energy and with his vigorous rhythmic drive imbue his music with a sense of irresistible momentum. Jason Vieaux (guitar), Nashville Symphony; Giancarlo Guerrero.