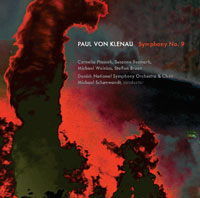 Description: This 89-minute conflation of Symphony and Requiem is one of several works, including Symphonies Nos. 4 and 8, a piano concerto and a violin concerto, found in 2001 among the possessions of Klenau’s wife’s family in Vienna. Dating from 1945, it’s in eight movements - four purely orchestral (I, III, V and VI) and the rest choral/orchestral with vocal soloists - and, though I haven’t tried it that way, you might find that each group can stand on its own although motives are shared by both types. Those of you familiar with Klenau’s First, Fifth and Seventh symphonies from their Dacapo releases in 2000 and 2002 (the latter, 01E001 is still available) will find the expected Germanic stylistic influences: Bruckner, Mahler, Wagner, and, the way the huge finale is paced and structured, Beethoven’s Ninth. Latin-Englisih texts. Cornelia Ptassek (soprano), Susanne Resmark (alto), Michael Weinius (tenor), Steffen Bruun (bass), Danish National Concert Choir, Danish National Symphony Orchestra; Michael Schønwandt.