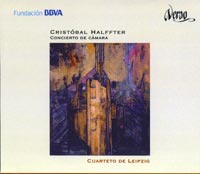 Description: These works all exemplify Halffter's preoccupation with the past as seen from the perspective of the present. The quartet and sextet make explicit reference to music of the Renaissance; the songs set very early texts, from the eleventh and fifteenth centuries. The quartet involves a conceptual aspect, in the incorporation of verses by Jorge Manrique, to be contemplated, so to speak, in the 'silent spaces' - extended pauses - between movements (on the bonus DVD, a tastefully filmed video of the same live performance as the CD, the texts show up on the screen as the performers sit motionless; they are given their own brief silent tracks in the audio recording). Beautiful, luminous quotations from 16th century motets illuminate the quartet's otherwise complex, intricate and hyperactive textures. The sextet's portrayal of the 'mad' queen Juana I is expressed in unquiet music, suddenly giving way to almost unbearably moving clarity in the gentlest and most poignant intrusion of music from her own time. The songs likewise bridge the dizzying gulf between antiquity and now, achieving a powerfully evocative, timeless quality in the process. Spanish, Ladino texts. Marina Pardo (mezzo), Leipzig String Quartet, Cristina Pozas (viola), Miguel Jiménez (cello).