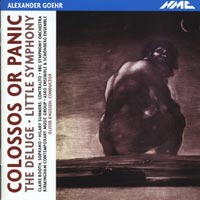 Description: Colossos or Panic (after Goya) is a bold, descriptive tone-poem in two large, contrasting sections. Part one is tense and dramatic, reflecting the panic-inducing nature of the looming colossus in harsh jagged interval-music of late Stravinsky, a hint of Schoenbergian expressionism and something of the metrical complexity of Carter. The more somber, harmonically richer second movement - the shocked aftermath of the monster's passing, perhaps - also recalls Stravinsky, but the earlier Stravinsky of the great ballets. Thirty years earlier, The Deluge sets a text of Leonardo in music more fragmentary than the later piece, clearly reflecting the young composer's absorption of Webern and Boulez. The half hour so-called Little Symphony followed soon after, but looks significantly farther back for its inspiration. An in memoriam work for the composer's father, the conductor Walter Goehr, the piece is a true symphonic structure in the established four-movement form, with a distinct sense of tonal movement and readily apparent allusions to repertoire with which the father was associated- Mahlerian nachtmusik, early Schoenberg, Debussy and Mussorgsky. Oliver Knussen (conductor).