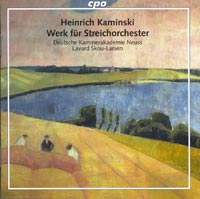 Description: This is an absolutely engrossing and breathtaking work whose mystical depths rival those of Bruckner (and much of whose second movement sounds quite a bit like a Bruckner slow movement). Four movements lasting 53 minutes with two predominantly slow movements, a ländler-like scherzo and a 19-minute fugue finale but, if you're into this sort of thing, it will suck you in, envelope you and gently nudge you off its golden cloud at the close. If only it were a symphony! It was written in 1916 and arranged for string orchestra in 1929 by one of Kaminski's pupils, now receiving his own belated recognition (see page 3 above). Deutsche Kammerakademie Neuss; Lavard Skou-Larsen.