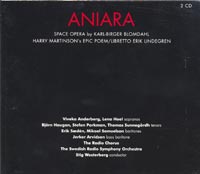 Description: Premiered at the dawn of the space age in 1959, this "space opera" was based on a Swedish book-length poem about a spaceship which abandoned a devasted Earth and which is thrown off course on its way to Mars. The musical language mixes jazz, hymns, cabaret, serial technique and electronic tape. There is almost no dialogue, with the story told by a single character and by a chorus. Since the Caprice label has only recently been picked up for U.S. distribution again, we offer this for anyone who may never have had the opportunity to buy this pioneering opera of its time. 2 CDs. Swedish-English libretto. Viveka Anderberg, Lena Hoel (sopranos), Björn Haugan, Stefan Parkman, Thomas Sunnegårdh (tenors), Erik Sædén, Mikael Samuelson (baritones), Jerker Arvidson (bass-baritone), Radio Chorus, Swedish Radio Symphony Orchestra; Stig Westerberg. Original 1985 release.