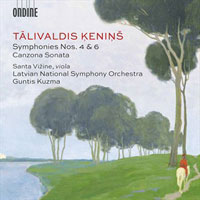 Description: Ķeniņš was a significant and original symphonist, as his First Symphony (10W001) amply demonstrated. Writing in a tonal idiom that nevertheless encompassed a very free approach to dissonance, and even occasionally aleatoric treatment of pitch and ensemble, he was essentially a neo-romantic, though of a rather modernist sort. The Fourth Symphony is economically, though colourfully scored, with extensive use of a large percussion battery, leading the composer wryly to describe it as "really a concerto for percussion." It begins with a long passage of mysterious gloom over an ominous, pulsing drumbeat, and disruptive side drum intrusions somewhat reminiscent of Nielsen 5. This tense, expectant mood suddenly gives way to a mechanistic allegro. After a climax this gives way to a tense, increasingly eerie mood that concludes part 1. The second part springs energetically to life, again with ample percussion colouration. A distinct reference to the Dies irae occurs, and the music assumes the character of a scherzo before subsiding into utterly frozen stillness. Tentatively, spring shoots begin to emerge from the glacial ice, and a lonely trumpet call ushers in the hyperactive final section. Ķeniņš revered Bach, and was himself a master of polyphony (many of his works incorporate contrapuntal techniques, including those on 10W001). He considered his succinct Sixth Symphony, subtitled "Sinfonia ad fugam” and based on a fugal theme derived from Bach, his best work. The symphony plays continuously, in four clearly delineated "movements" of which the first emerges out of nothing with a growing sense of stately ceremony, suggesting the spirit of the B minor Mass or Bach's own grand fugues. Thrilling polyphony at high velocity forms the "scherzo", followed by a slow movement which rises to a glowing climax which features one of the composer’s most striking timbral innovations. The finale begins brusquely, but transitions into a conclusion of sublime mystery. The Canzona Sonata for viola and strings was described by the composer as an "instrumental song", and follows a dramatic arc of an ascent towards the heavens, the soloist increasingly soaring above the orchestra’s supporting harmony. Santa Vižine (viola), Latvian National Symphony Orchestra; Guntis Kuzma.