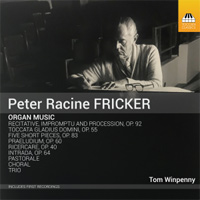 Description: Having hailed Fricker as a major (misunderstood and unfairly neglected) symphonist in 2017 (10T001), we now discover that the same applies to his output for organ, an instrument with which he had great affinity - to the point of seriously considering a career as an organist. His embrace of serial techniques (which always stayed firmly in the 'composer’s workshop') scared off traditionalists; his adherence to traditional forms and harmony did not please the avant-garde, and his departure for the USA in 1965 put paid to his burgeoning reputation in his home country, and resulted in the almost total neglect of his organ music after his death. His intricate and immaculately crafted contrapuntal style suited the organ perfectly, and he wrote for the instrument throughout his career. The early (1956) Choral, a set of variations, is the least tonal work here, and relatively cerebral, though by no means lacking in variety or accessibility. Two works here, the Intrada and the stunning Toccata “Gladius Domini” (after a vision in one of Savonarola's banned sermons) are thrillingly extrovert, the former an exciting moto perpetuo and the latter a large-scale toccata more than a little reminiscent of Messiaen's Combat de la Mort et de la Vie or Dieu parmi nous. Elsewhere, Fricker's style is more restrained, notably in his last organ work, Recitative, Impromptu and Procession, a work of serene, crystalline argument and inevitability of progression. The same may be said of the impressive Ricercare, which transforms its material as it approaches a final monumental conclusion and which sounds very tonal, if very dissonant. The 5 Short Pieces are relatively straightforward, and are very approachable; somewhat didactic in intent, they would nevertheless not be out of place as voluntaries for general use. Tom Winpenny (organ of Bridlington Priory).