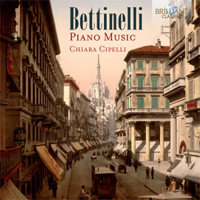 Description: As a teacher of theory and composition at the Accademia di Santa Cecilia in Rome, Bettinelli had a decisive influence on the careers of Claudio Abbado, Riccardo Chailly, Riccardo Muti and Maurizio Pollini. Outside his native Italy, his work as a teacher has overshadowed his own music, which is now being recognised as the output of a distinctive voice in the generation between Luigi Dallapiccola and modernist pioneers such as Luigi Nono. The most ambitious work on the album, the 1955 Fantasia, making free use of tonality in the context of post- Romantic writing, is preceded by the more picaresque charms of the three-movement Suite agreste and followed by two contrasting collections of miniatures, the 18 “Easy Pieces” from 1941 – owing something to neoclassical Hindemith – and the 10 exquisite fragments which make up Sintesi. Written in 1970, the latter distils Bettinelli’s own adoption of atonal technique to its most poetic essence. Chiara Cipelli (piano).