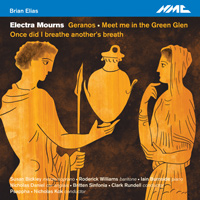 Description: Elias' music is vivid and characterful, and readily accessible although his idiom is not at all conventional. There is a type of British composer adept at conjuring a sense of antiquity and mystery (among whom Birtwistle is pre-eminent), and Elias also excels at this. Geranos (1985) was written for the Fires of London. It is an extended ensemble piece of some complexity, evoking dances of ancient Greece - not so much in the way it actually sounds as in the sense of forgotten ritual that it conjures. Instrumental lines seem to inspire one another to join in and elaborate the evolving texture. Electra Mourns is a dramatic scena of Electra's lament for Orestes from Sophocles' play. This 2011 work, like the two song cycles, draws much more on tonality than the earlier work, and is very effective at portraying the grief, outrage and anger of the protagonist. The addition of the partnering cor anglé soloist, underling the emotions too intense for words alone, is a striking touch. The song cycles, drawing on poems by John Clare and 16th century English poets, although in a modern idiom, refer to romantic and folksong styles to capture the archaic passion of the poetry. Meet Me ... can be sung by either of the voices in the composer-approved composite version on the CD, and purchase of the disc entitles you to a free download of both versions complete.