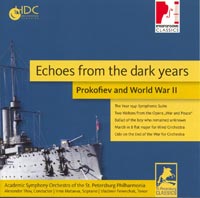 Description: Some of Prokofiev's most famous works were written during the Second World War (War and Piece, Symphony No. 5) but so were many which he had to do for the propaganda purposes of the regime, one of the most obscure of which is the 24-minute cantata about the revenge of a young boy whose mother and sister were killed by the Germans. This, and everything else here, are immediately recognizable as Prokofiev; there's no drop-off in the quality of the music regardless of the texts or the purpose of the music. No texts. Irina Mataeva (soprano), Vladimir Felenchak (tenor), Student Choir of St. Petersburg's Rimsky-Korsakov Conservatory, Academic Symphony Orchestra of the St. Petersburg Philharmonia; Alexander Titov. Original 2003 Beaux release.