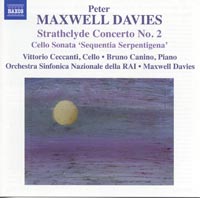 Description: The second of the ten Strathclyde concerto commissions dates from 1987, when Davies' post-romantic tendencies, such as they were, that first came to prominence in the Second Symphony, were at their height. This concerto, with its impassioned ad eloquent solo line and distinct suggestions of tonal harmonic thinking, is very approachable and would serve as a good introduction to the composer for the uninitiated, as the more abrasive, thoroughly atonal works of the 60s and 70s would not. In conventional three-movement form, the concerto begins with an expressive movement with the soloist very much to the fore, culminating in an extended accompanied cadenza. The second movement is slow, but intense, with the tension in the discourse between the soloist and orchestra increasingly vehemently expressed as the movement progresses. The active, jittery finale treats instrumental groups within the orchestra as protagonists in their own right, with the music's forward momentum constantly menaced by strident brass interjections. The Sonata has its origins in the composer's interest in Italian churches, and is based on an elaboration of a Gregorian chant, a device commonly encountered in Davies music. The six movements follow an arc of sustained lyrical intensity, centered on the long-breathed, melodic adagio at the heart of the work. Vittorio Ceccanti (cello), Bruno Canino (piano).