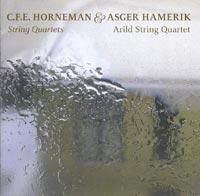 Description: These Danish cousins did not make their mark in chamber music so these early quartets are a road not travelled. Hamerik's six-minute torso which certainly is Allegro energico as marked, dates from 1859; Horneman's First (1859 also) was written while he was at the Leipzig Conservatory and sounds like a work written at the school Mendelssohn founded while the Second of only two years later shows the young composer moving on into mid-century Romanticism. Arild String Quartet.