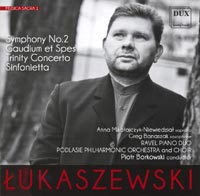 Description: These are very impressive, and thoroughly approachable works in bold neo-romantic style. 'Joy and Hope' is a grand, monumental setting of the text, referring to the Second Vatican Council's manifesto for the Catholic Church, with something of the 'new spirituality' about it, though with a richer, more varied harmonic palette than that often implies. The taut little Sinfonietta is based on obsessively repeating propulsive motifs, providing an irresistible forward momentum, which contrasts with the liltingly melodic first movements of the Trinity Concerto, in which the persistent rhythmic motion creates an hypnotic framework for the mellow, lyrical solo part. The second movement has a lively minimalistic pulse, while the third returns to the gently consoling songlike manner of the first. Adagietto sounds as though it was written as a companion piece to the Barber Adagio. The symphony combines both types of writing; the big, sumptuous choral gestures and fanfares of 'Gaudium ...', the textures made denser by dissonant intervals added to the composer's fundamentally tonal chord structures, and passages in which the orchestral accompaniment is driven by motoric ostinati, sometimes producing a result curiously reminiscent of Orff. This rhythmic element becomes more important as the work progresses. The text is by Fr Jan Twardowski, derived from the teachings of Pope John Paul II and concerns the passage of time and the need for haste as the time given to mankind to express love is so limited. The piece is in the customary four symphonic movements, the first clearly in sonata form; the second a solemn slow movement, followed by a vigorous, pounding scherzo and a powerful, declamatory finale. Anna Mikolajczyk-Niewiedzial (soprano), Greg Banaszak (sax), Ravel Piano Duo, Podlasie Philharmonic Choir and Orchestra; Piotr Borkowski.