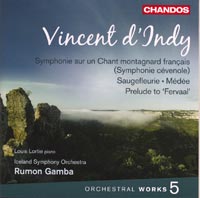 Description: Around 40 minutes of rather neglected music on this fifth volume of Chandos' series: the tone-poem Saugefleurie (a sage-flower fairy who falls in love with a prince who's out on a hunt) is from 1884 and mixes Wagnerian influences into a characteristically Gallic clear and luminous orchestration (previous CD recordings on Hyperion in 2009 and the defunct Valois label in 1993), and the 25-minute suite of incidental music from staging of Catulle Mendès' play Medée (1898) which is notable for its wide-ranging contrasts of melody and texture; its only other CD appearance was on a long-gone Marco Polo from 1994. Louis Lortie (piano), Iceland Symphony Orchestra; Rumon Gamba.