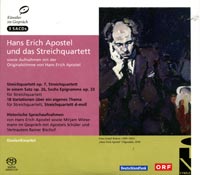 Description: Apostel was a follower of Schoenberg and Berg, and a student of both, with considerably more in common with the latter stylistically. By the time he was writing works which he acknowledged with opus numbers he had progressed beyond the late romanticism that infuses his earlier scores, and the Quartet Op.7 is freely atonal, rigorously organized and beautifully crafted, reminding one not a little of Berg's Lyric Suite. Apostel's emphasis on form and architecture render his works highly satisfying, perfectly proportioned assemblages of formal devices, whose emotional content seems accordingly described, not lived; but described in finely selected terms nonetheless. The 1956 Quartet, Op. 26 and the composer's final work for quartet, the 1962 Epigrams, both employ dodecaphonic techniques, treated according to strict, personally inflected, rules; the former, a concentrated work of considerable tension and tautly argued dialectic, incorporates a kind of passacaglia in its treatment of the tone-row material. The early works are disconcertingly different in style from Apostel's mature output; the variations are ingenious and accomplished, entirely tonal (with some early-Schoenberg chromaticisms disturbing a basically Brahmsian vocabulary); the early quartet is attractive, somewhat more harmonically advanced but still obviously a very accomplished student work. Also contains a 10-minute radio talk with the composer from 1968, a three-minute laudatio by Apostel for the 50th birthday of a friend in 1966 and 90 minutes of conversation with Austrian scholar Rainer Bischof. 3 CDs for the price of 2. Doelen Quartet. SACD hybrid.