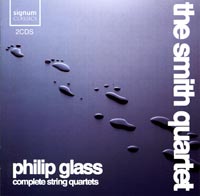 Description: Glass has written for the string quartet on and off throughout his career - three early examples have apparently been discarded, the acknowledged "No.1' dating from 1966. This is a relatively angular and dissonant work, as compared to Glass' instantly recognizable mature style. It is built entirely of repeated gestures, but these tend to be bare intervals rather than the familiar arpeggiated chords, and the familiar insistent rhythmic pulsation has yet to fully develop. The second quartet from 17 years later is instantly recognizable Glass, and the third, developed from the quartet music that forms part of the Mishima soundtrack epitomises the mid-80s small-ensemble Glass style. The familiar gestures are all here, and presented in chamber-music form their lyrical intensity, as well as the dramatic insistence of the rhythmic obsessiveness, becomes especially apparent. With the fourth, an in memoriam piece for the artist Brian Buczak, and even more so in the latest (1991) fifth, Glass' more recent brand of neo-romanticism begins to be apparent. Although repeated structures are still the building blocks of the music, there is greater emphasis on melodic writing, to which the insistent pulsation is used as accompaniment, rather than an end in itself. Paradoxically, the more recent music sounds less 'modern' despite its greater chromaticism; especially in the chamber music medium it is the most closely allied to classical/romantic models of Glass' output so far. 2 CDs. The Smith Quartet.