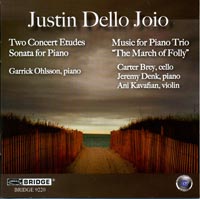 Description: This urgent and expressive music has an immediate impact on the listener, thus allowing the works' tough and uncompromising argument to emerge all the more forcefully. The composer uses tonal centers, frequently in an explicitly functional manner, providing a very clear sense of direction and progress toward a definite conclusion, perhaps one of the music's most striking features. The trio begins with an ironic march, rather reminiscent of Prokofiev, and proceeds through a series of contrasting episodes so characterful that they almost sound programmatic, before arriving at a final ambiguous though not despairing resolution, with something in common with Mahler's 9th symphony. The dramatic, large-scale sonata also has a sense of quasi-narrative progression, with the first movement a series of variations on a somber theme, the second a tender romance, and the third a whirlwind of virtuosic display with more than a hint of the gestures of the Romantic piano sonata, which is gradually infiltrated by the opening theme, leading to a powerful conclusion. The études are expressive concert works far more than technical studies - like all the best études, of course - but also allow ample scope for pianistic display.