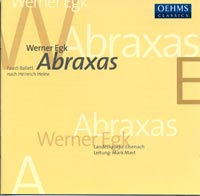 Description: This ballet, premiered in Munich in 1948, may be Egk's best-known work since it was banned after five sold-out performances due to its danger to "public morality". Why? The third movement is a Black Mass. Egk based this work on Heinrich Heine's never-produced 1848 dance-poem "Der Doktor Faust", working in it right after the end of the war, "although he had no commissions", as the notes tells us. (Classic evasive German note-writing again - he had no commissions because he was going through de-Nazification proceedings, having been head of the German Union of Composers from 1941-45!) The full ballet of 75 minutes length is recorded here (Egk also produced a suite), in five scenes: "The Pact", "Involvement", "Pandemonium", "Hallucination" and "Denouement". Egk, unlike almost all of his German contemporaries, was influenced primarily by French music and by Stravinsky and both are vividly present throughout the work (a good part of the second scene sounds like scores Bernard Hermann was about to start writing too). Landeskapelle Eisenach; Mark Mast.