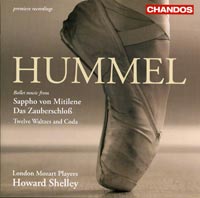 Description: Chandos gets into some really obscure Hummel now (and there's plenty more out there where this came from!) with two ballet suites. Nothing is known about the scenario of either beyond what can be inferred from the titles but Sappho (the manuscript is dated 1812) was in five acts and this "mere" suite is 47 minutes long. Both it and the "Magic Castle" (19 minutes) use a very large orchestra and Sappho makes much use of the wind instruments, with solos for clarinet, cor anglais, oboe and flute. The nine minutes of waltzes remind us that Hummel did, of course, live in Vienna! London Mozart Players; Howard Shelley.