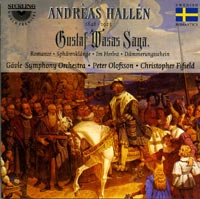 Description: Another example of a composer considered too avant-garde in his youth and hopelessly conservative in his late maturity and old age, Hallén was probably the most cosmopolitan Swedish composer of his generation, early adopting Wagner and Liszt as models. The latter influenced Hallén's several tone-poems and Sphärenklänge, from 1895, shows the influence of both. A Nordic tone is sometimes audible in the 1897 Gustaf Wasas Saga, a suite from incidental music for a play about the king who united Sweden (and which has a striking "sunrise" first movement) while the "In Autumn" diptych (containing "Elves' Moonlight Dance" and "Dream Pictures at Twilight") suggests Mendelssohn in the first piece while the second anticpates Alfvén. Peter Olofsson (violin), Gävle Symphony Orchestra; Christopher Fifield.