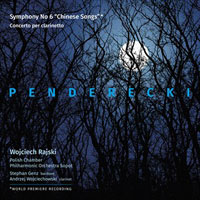 Description: This gorgeous late-romantic symphony is in a way the logical conclusion (though let us devoutly hope that he's not done yet; apparently he aspires to leave a legacy of 9 symphonies * Since writing that, the news of his death came in. RIP) of the trajectory that Penderecki's idiom has taken since his adoption of tonality in the early 1980s. The work is a full-blown example of trends in the early 20th century, and its antecedents are Mahler, early Schönberg, Zemlinsky, and Szymanowski. If this description sounds reactionary and conservative, the music doesn’t; Penderecki is a strong enough musical personality that there is no sense of pastiche. The symphony had a complex genesis; originally conceived in 2003, it was completed in 2017, having been pre-empted by Nos. 7 and 8. A symphony-song cycle in eight movements, it sets poems from Hans Bethge's "Die chinesische Flöte", which immediately invites comparison with Das Lied von der Erde, which are stylistically not inappropriate, though there is no sense whatsoever of imitation. The poems' recurring motifs of autumnal loneliness amid the beauties of nature, heartbreak, farewell, melancholy and yearning elicit a musical response of the utmost beauty and richness of texture and harmony from the composer, with the exquisite and original sense of tone color that has been a constant throughout his stylistic evolution. Some use of whole-tone scales and three linking solo interludes for the distinctive timbre of the Erhu subtly evoke the poems' Chinese cultural heritage. The Clarinet Concerto is the composer’s transcription of his tough, brooding neo-romanticism-meets-Shostakovich Viola Concerto of 1982 (10N009), which also exists in a version for cello, and a highly effective one for guitar (09V056). German-English texts. Stephan Genz (baritone), Andrei Wojciechowski (clarinet), Polish Chamber Philharmonic Orchestra Sopot; Wojciech Rajski.