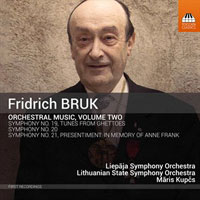 Description: Born in Kharkov in 1937 and a Finnish resident since 1974, Bruk made his name as a composer of tangos. But the heart of his music lies in a series of (to date) 21 symphonies, which have a strong narrative element, some reflecting Jewish themes, others inspired by Karelia and Finland. The three most recent together form a kind of meta-symphony premised on the persecution of the Jews in the first half of the twentieth century. Bruk’s kaleidoscopic use of orchestral color, his angular but expressive melodies and his dramatic musical language reflect this urge to chronicle the outrage visited on his fellow Jews – and which directly impinged on his own life. Liepāja Symphony Orchestra, Lithuanian State Symphony Orchestra (No. 20); Māris Kupčs.