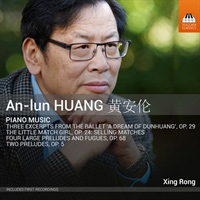 Description: As master pianist Joseph Banowetz writes in his introductory notes : "Huang’s reverence for the music of Bach manifested itself at a very early age and is still evident in the four transcriptions of his Op. 68" and "An-lun Huang’s piano transcriptions of his own works are masterpieces of the discipline ...". Banowetz knows whereof he speaks; as one of the great interpreters of our time of the works of Liszt, Busoni, and countless other great figures of the golden age of pianism, he must have been greatly heartened to discover a living specimen of the species. The two early Preludes and Fugues show Chopinesque and Rachmaninovian influence; the four of Op. 68 use original themes (the first incorporates the BACH motif), but any of them could be transcriptions of Bach organ works by one of the great Romantic piano-transcribers, with appropriate Organo pieno textures at the conclusion of the large, powerful fugues. They were in fact originally conceived for cello ensemble or organ, but such is the transcriber's skill that they sound entirely native to the instrument. So do Huang's transcriptions of pieces from his ballets, which are warmly Romantic and tuneful. Pentatonic and modal material occurs naturally enough in the three movements from the Chinese-themed work, but otherwise the works belong entirely in the western concert hall. Xing Rong (piano).