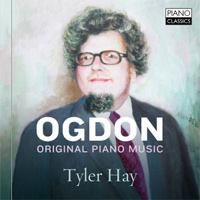 Description: Ogdon composed throughout his career, and produced a sufficiently substantial body of works to legitimately regarded as a 'pianist-composer' were it not that his extraordinary, unique gifts at the keyboard largely eclipsed everything else (and then the unseemly, sensational attention afforded his mental health eclipsed even that). He was no dilettante as composer, and especially early in his career wrote some first-rate, cogently structured works of great imagination and originality, including all those on this most welcome disc. (Others, with little overlap, are on 08P076, played by the composer.) The Sonata was his first, a three-movement, largely conventional structure which, like all his piano music, takes for granted a degree of super-virtuosity from the performer born of Ogdon's own complete mastery of the instrument. Shades of Busoni, one of Ogdon's most admired models, occur throughout the work, especially the first two movements, where Messiaen also makes appearances - probably not coincidentally, he was playing and recording both composers extensively around this time. The driven first movement is based on a penetrating ostinato figure; the second is a most imaginative set of variations, and the third an energetic, Prokofiev-like toccata in dense textures (with cascading bells borrowed from Rachmaninov). The Variations and Fugue is arguably Ogdon's most pianistically ferocious work, a synthesis of the styles of his modernist Manchester colleagues, more than a trace of his sometime mentor Ronald Stevenson, and other music that appealed to him at the time, including, quite unmistakably, Sorabji, to whose Opus Clavicembalisticum he had been introduced by his friend Peter Maxwell Davies. The Kaleidoscope works are like sketchbooks; this one contains two skilled contrapuntal works, two lovely and surprisingly simple little aquarelles and two pieces that highlight compositional and performing exuberance and virtuosity. The Ballade has the dramatic narrative character associated with famous examples of the form (with which Ogdon was of course more than familiar), and makes much use of Busonian ambiguity of keys (and for that matter, textures). Tyler Hay (piano).