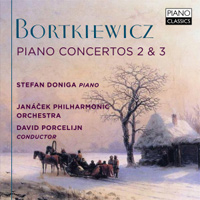 Description: One of the many concertos written for Paul Wittgenstein (in 1923 in this case), Bortkiewicz's Second, the property of the pianist by contract until his retirement (when Siegfried Rapp, another one-armed pianist, played it several times) and death, was never published and has not been heard again until this recording. A stormy, film-score kind of work, it makes Rachmaninov seem like an emotional wallflower and its opening grabs you by the throat and rips you along for an emotional ride ringing all the Romantic changes of the Chopin, Liszt, Tchaikovsky schools along the way before its final section - an uplifting, optimistic dance in 3/4 time - provides a relaxing, sunny conclusion. Bortkiewicz subtitled his Third (1927) Per aspera ad astra and its trajectory from an oppressive C minor to a thrilling and radiant C major suggests the composer's recent history of escape from the Soviet Union, several years of near-penniless exile in Constantinople and Yugoslavia and, finally, the attaining of Austrian citizenship and a more stable life. Stefan Doniga (piano), Janáček Philharmonic Orchestra; David Porcelijn. Original 2009 Netherlands Music Institute release.