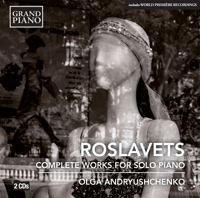 Description: Stravinsky described Roslavets as "the most interesting Russian composer of the 20th century," but after decades of suppression in the former Soviet Union his significance is still being assessed even today through newly discovered and reconstructed works. Although Scriabin's influence can be heard in earlier works, Roslavets' constant experimentation with original and complex compositional techniques resulted in his "new system of tone organization" and "synthetic chords". Olga Andryuschchenko describes Roslavets' daunting piano music as "fire and ice!"