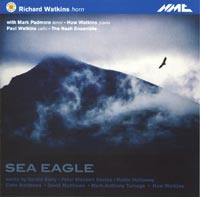 Description: Colin Matthews' work was written for the performers here in different combinations, hence the punning title. It concludes with a searching slow movement for all three, reworked from an existing work for viola. His brother's substantial Quintet is the most conventionally neo-romantic here, which is to say nothing of its quality, which is of a very high order. In memory of the composer's colleague and friend Nicholas Maw, it consists of a poignant and passionate elegiac movement linked by a cadenza to a livelier, celebratory one with reflective episodes. The Holloway is similarly structured and almost as tonal. It makes much of the interchange of ideas between the two monodic instruments in the same register but different timbres - the piano doesn't enter until halfway through the first movement, with an extended solo of its own - and also progresses from a serious, somber mood to a more energetic one with a sense of resolution. Watkins' taut single span piece alternates two sets of material, the first active and agitated, based on an insistent, angular motif; the other slower but still tense in ascending scales and 'romantic' horn-calls. The Davies is an atmospheric work in three movements, of which the last has become a test piece due to the technical demands, difficult scales and leaps, the horn equivalent of the (much earlier) trumpet and piano sonata. Barry's eccentric and humorous piece sets Lewis Carroll's Jabberwocky, first in French translation, then German, in a style that sounds like slightly mad 'populist' Eisler, with raucous interjections from the horn. Richard Watkins (horn), Paul Watkins (cello), Laura Samuel (violin), Huw Watkins (piano).